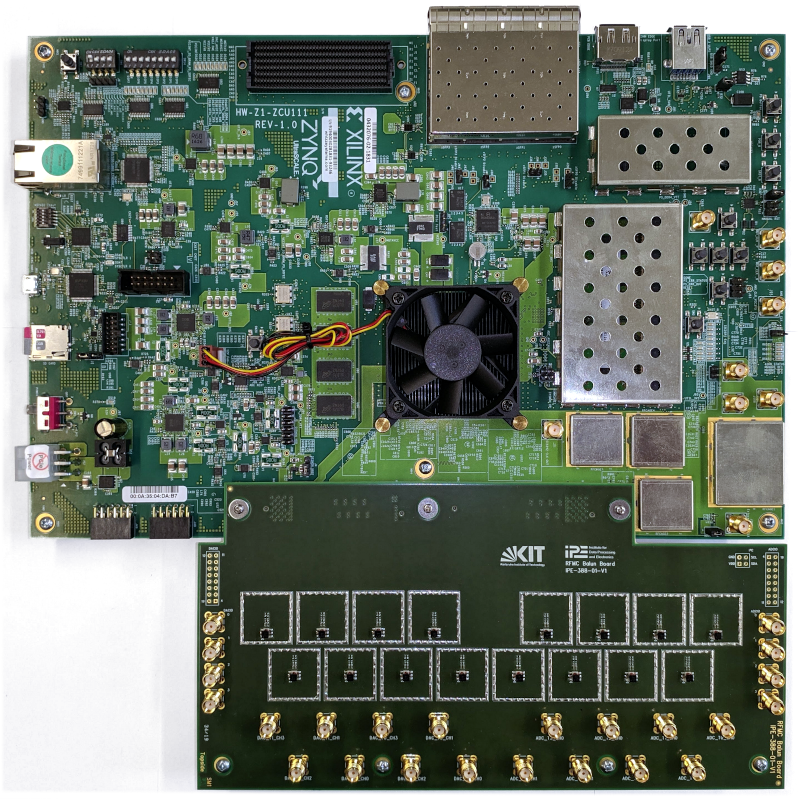 Quantum computers promise answers to questions that seem unsolvable with normal computers. Applications are manifold and range from material sciences and drug research to machine learning, artificial intelligence and other optimization problems. Especially in recent years, the topic has attracted increasing attention due to growing industrial interest and significant progress in error correction and scaling. Nevertheless, many scientific and engineering challenges remain to be solved before a universal quantum computer can be realized. Worldwide research is therefore being conducted on implementation possibilities for quantum processors, the necessary electronics and quantum algorithms in order to come closer to this goal. The Karlsruhe Institute of Technology (KIT) is also very actively involved in this field of research. At the Physikalisches Institut of KIT, superconducting quantum bits are being researched as a promising candidate for the realization of a quantum processor. The KIT start-up HQS Quantum Simulations develops algorithms for quantum computers. The spectrum is completed by our activities at IPE to develop and provide the necessary electronics and software to link both worlds.

Superconducting quantum bits, also called qubits, are circuits made of superconducting materials. These lose their electrical resistance abruptly below a critical temperature. At the same time, quantum physical effects occur, which give the quantum bit the necessary properties. While the information is stored in the quantum mechanical state of the qubits, operations take place in the form of external electromagnetic signals. These microwave pulses are able to change the state of the quantum bits. Typical properties of the pulses are frequencies of several gigahertz and pulse durations in the nanosecond range. In addition to the necessary precision of the pulses themselves, the deterministic sequence of the pulses is an important requirement. This also includes the reliable readout of the qubit states, which is also performed by microwave pulses and their subsequent evaluation.

At the IPE we are developing scalable electronics that enable superconducting quantum bits to be controlled and read out by means of microwave pulses. The focus here is on a complete system that covers the entire signal processing chain: from analog signal conditioning with high-frequency mixers, signal generation and digitization, to data processing, evaluation and provision to the user.

Therefore, we research and develop new concepts for user operation and innovative methods for analog conversion of microwave pulses in addition to pure possibilities for pulse generation and processing. Our system has been used in experiments at the Physikalisches Institut since 2017. Based on the experiences and requirements it has been continuously developed further and supplemented with new functionalities since then.

The heart of the system is the heterogeneous multiprocessor architecture, which connects an application processor and a real-time processor (APU and RPU) as well as an FPGA. FPGAs are programmable logic circuits that allow complex signal processing algorithms to be mapped into logic in a highly parallel fashion. In our case this includes a sequencer, the generation of microwave pulses (pulse generators), as well as the recording and evaluation of the signals returning from the qubits (recording). Due to the requirements for nanosecond precision and deterministic processes, an FPGA is the ideal solution here. 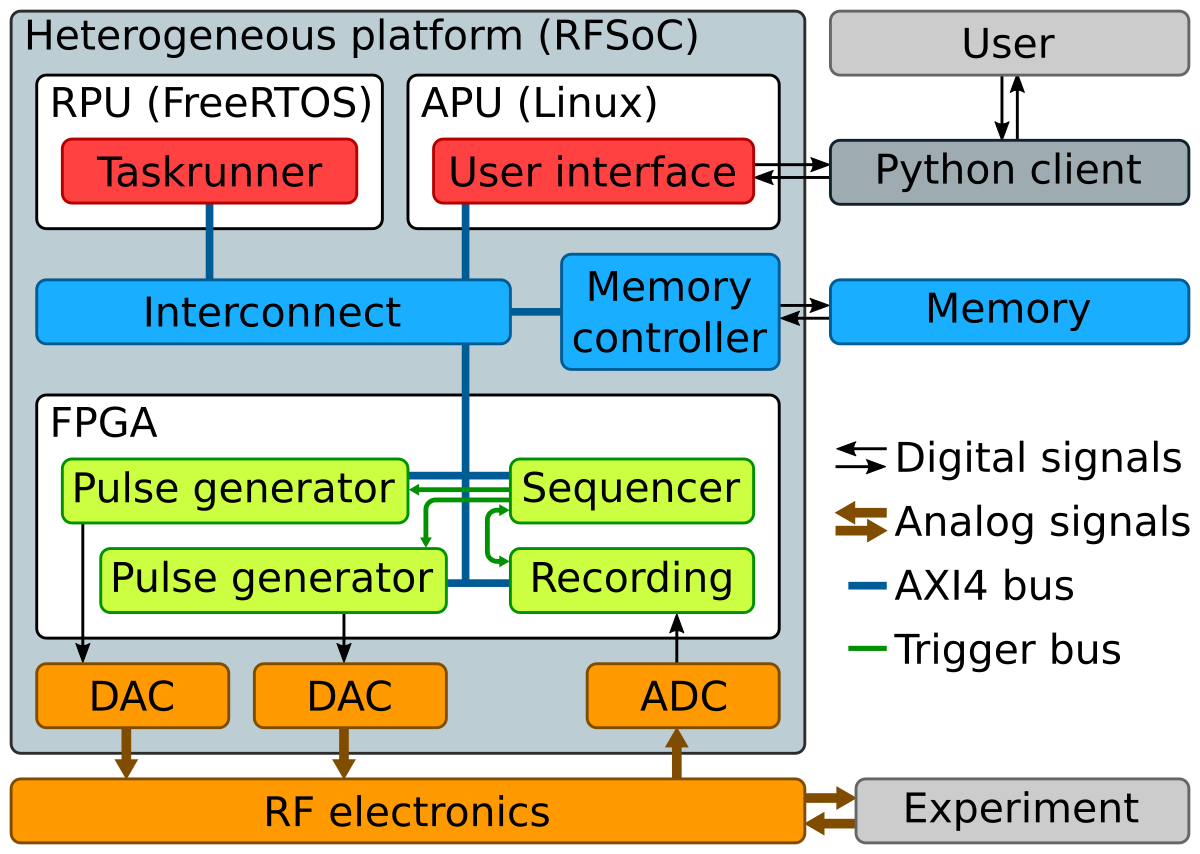 The configuration and interaction with the logic on the FPGA takes place via an address-based AXI4 bus, which is connected to the CPUs of the heterogeneous system. Via this bus, the individual modules on the FPGA can be configured and prepared for an experiment. This also enables the query of individual measurement results. Therefore, a modular communication server developed by us, the so-called ServiceHub, runs on the APU. With this hub the modules on the FPGA can be easily configured and read out via Ethernet.

The FPGA modules can also be accessed via the RPU. This access is especially fast and can be done with deterministic access time due to the real-time capability of the processor. This makes it possible to implement time-critical processes, which exceed the functional scope of the sequencer, very close to hardware and with low overhead in software. To make this as easy as possible for the user, we have developed our own framework, the Taskrunner. This allows to transfer C-files to the platform, where they are compiled and loaded onto the RPU. At the same time, the taskrunner provides defined interfaces to interact with the processor and transfer data back to the user.

In order to combine all requirements as efficiently as possible on one system, we currently rely on the still young ZYNQ UltraScale+ RFSoC series from Xilinx. This series combines the required processors and FPGA as well as powerful analog-digital and digital-analog converters on one chip. For the current version we therefore use the ZCU111 evaluation board from Xilinx. We combine this with a self-designed RFMC adapter board to connect the inputs and outputs of the converters to SMA connectors.

Since digital-to-analog converters are limited to frequencies of a few hundred megahertz to a few gigahertz at most, signal conversion to the target frequency range of typically 4 to 12 gigahertz is inevitable. 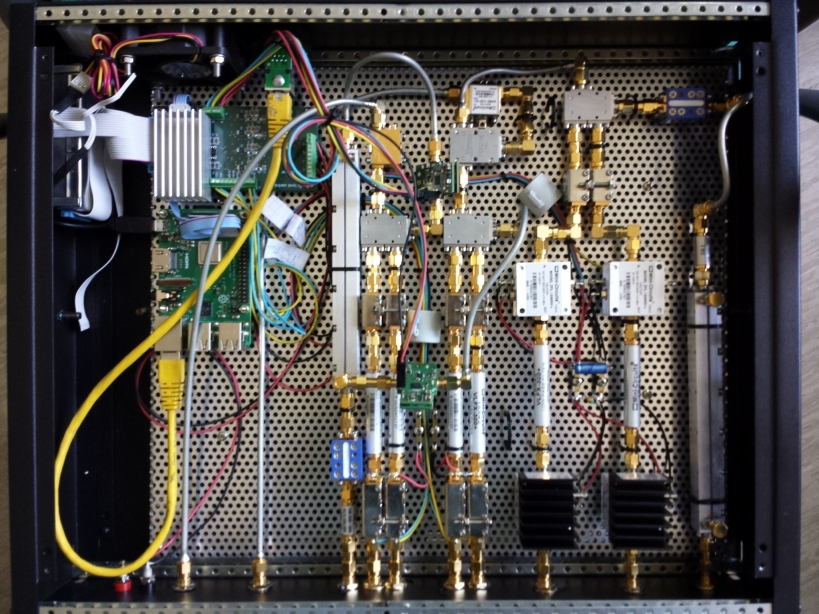 Up to now, experimental physicists have mainly built their analog electronics themselves from discrete elements and subsequently calibrated them. We also want to integrate this important aspect into our complete system and make it controllable through digital control options. In a first step, we have therefore added controllable amplifiers and dampers to the discrete setup. By integrating a self-developed supply and control voltage board as well as a Raspberry Pi, the level setting can be done purely digitally via Ethernet. The system (see picture above) allows the up- and down-mixing of an IQ readout band as well as the up-mixing of a separate IQ manipulation signal, which are then combined via a directional coupler onto an output line. The levels of both signals can be controlled independently of each other. 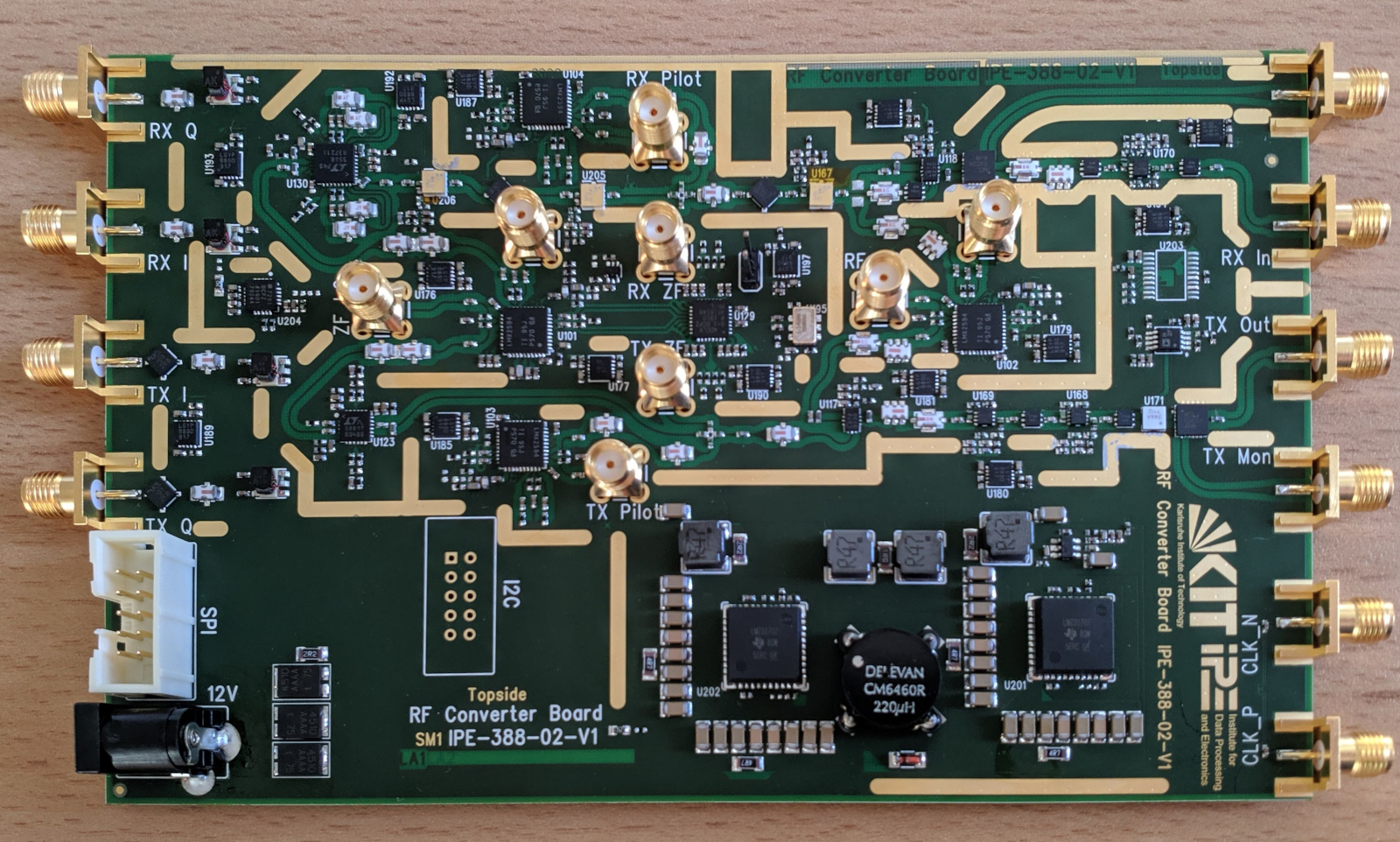 Mixing up and down of readout signals is a standard task for most experimental setups with superconducting quantum bits. However, as the number of quantum bits in a system increases, the manual setup can become very resource-intensive and error-prone. We meet this challenge by developing our own mixer board, which integrates the local oscillators directly in addition to the mixing process. In this way we can make an important contribution to reducing the complexity of experimental setups, enabling a stronger connection to our control electronics and at the same time achieving a significant cost reduction. Using an innovative mixing process, the complex IQ signals can be converted to the target frequency at low cost. At the same time, a digital interface allows the configuration of all components, such as the frequency of the local oscillator and the levels of the variable amplifiers and dampers. This can be done either integrated by the platform or in autonomous operation together with a Raspberry Pi. We are currently researching optimizations of this concept on the one hand, and a novel mixing method on the other hand, in order to provide a precise, cost-effective and efficient solution not only for the readout but also for the control.

A functional complete system also includes the possibility to use it comfortably as a user. For this reason, the Python driver development on the one hand, but also the platform internal software development on the other hand, is an integral part of our research. We are especially concerned with the possibilities of describing experiments with superconducting qubits as intuitively and platform-independently as possible. Furthermore, we are also interested in possibilities of efficient data exchange. This can be used especially during running experiments for a continuous build-up of measurement results in order to enable an early assessment by the user.

Our Python library is compatible with the measurement environment Qkit, which is specialized in experiments with superconducting quantum bits and is being developed by the Physikalisches Institut at KIT.

We are a young, motivated and interdisciplinary team at Campus North, working at the interface of physics, electrical engineering and computer science. Our group develops electronics to control and read out superconducting circuits in experiments. On the one hand, the focus is on superconducting quantum bits as they could be used for future quantum computers. On the other hand we also read out large SQUID-based detector arrays.

Students are an integral part and one of the pillars of our team. We continuously offer bachelor and master theses as well as hiwi jobs in a wide range of topics and are happy to receive active support. Those who are technically enthusiastic will definitely find a varied and exciting field of research here. If you are interested, have a look at the advertised jobs or simply contact Oliver Sander.